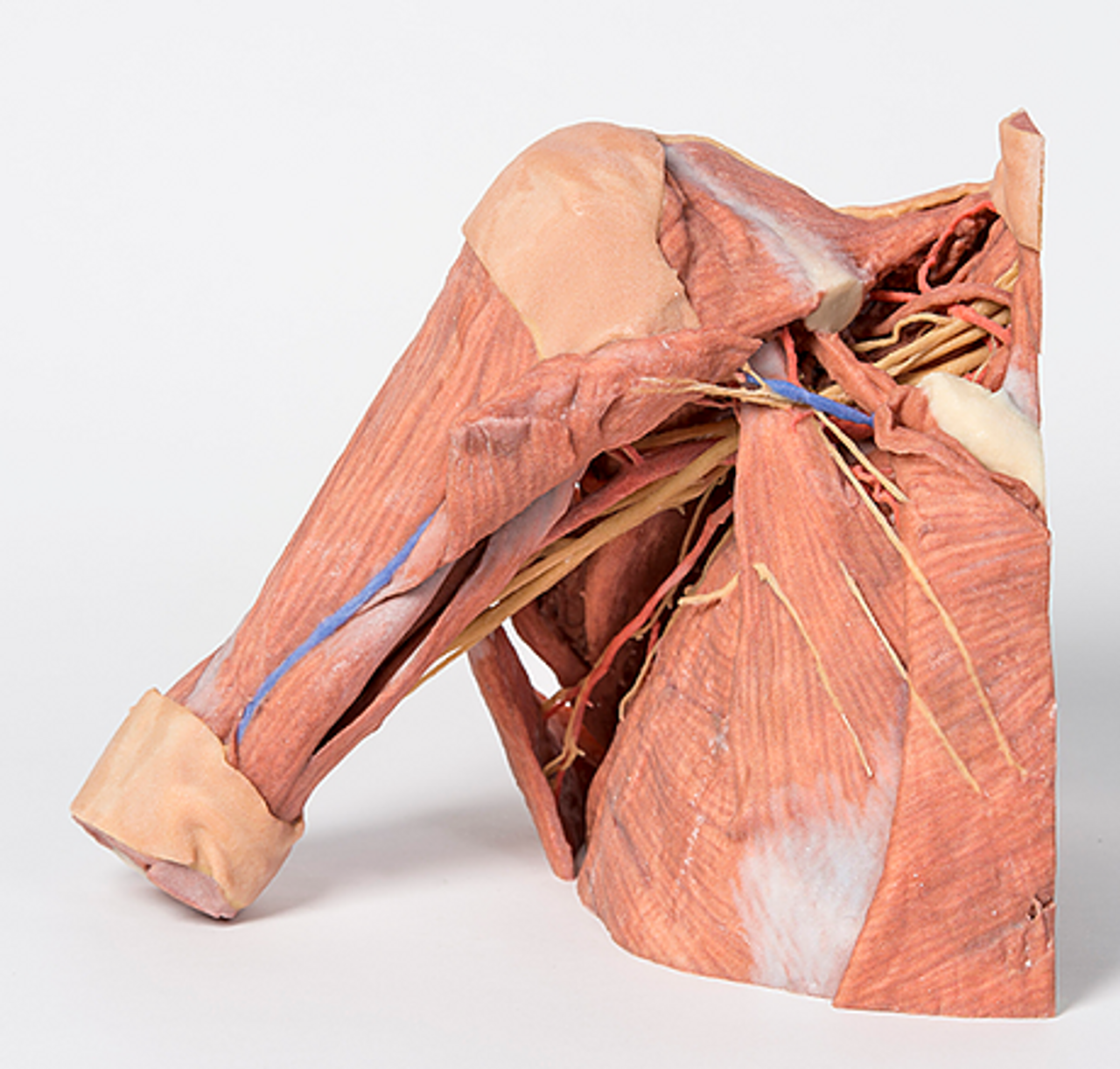 This 3D printed specimen shows the right thoracic wall, axilla, and the root of the neck. The dissection specimin on which the model is based is cut just parasagittally and the visceral contents of the chest have been removed.

The 3D Human Anatomy Series is the result of a collaboration between Monash University in Australia and German manufacturer Erler Zimmer. The 3D printed human anatomy models in this collection are highly accurate colour-augmented representations, designed to substitute the use of real human cadavers in anatomy education. Each model has been developed from radiographic data or cadaver specimins, providing a highly cost effective and ethical solution to meet the needs of medical, allied health and biological science educators.

In this armpit dissection model, the structures within the right chest wall are visible deep to the parietal pleura, including the ribs, muscles of the intercostal spaces and the origins of the neurovascular bundle in each intercostal space. The pectoralis major has been reflected medially towards the sectioned edge of the specimen to expose pectoralis minor which acts as a useful landmark as it divides the axillary artery into its three parts.

The clavicle has had its middle 1/3 removed, but the subclavius muscle has been retained. The brachial plexus and many of its branches are seen almost in its entirety from the roots of C5-T1 to its termination as it exits the axilla to enter the arm. Of the structures preserved on the specimen:

Nerves: The medial pectoral nerves can be seen penetrating pectoralis minor, while the lateral pectoral nerve can be identified on the medial upper border of the pectoralis minor (one branch of which is reflected with the transected humeral portion of the pectoralis major). The cords of the brachial plexus can be identified around the 2nd part of the axillary artery. The major terminal nerves of the plexus (musculocutaneous, median, ulnar, radial and axillary nerves ) are all identifiable. The long thoracic nerve is visible lying on the surface of serratus anterior, as is the thoracodorsal nerve alongside the thoracodorsal artery as they descend to enter the latissimus dorsi muscle. The dorsal scapular nerve and artery are visible above and below omohyoid. The axillary nerve accompanied by the posterior circumflex humeral artery can be seen passing posteriorly just below the neck of the humerus. In the root of the neck the phrenic nerve is just visible as it passes on the anterior surface of scalenus anterior muscle from its lateral border to its medial border and a thin accessory phrenic nerve is identifiable.

Vessels: Some of the branches of the subclavian artery (e.g., the transverse cervical and suprascapular arteries passing transversely across the root of the neck) can be clearly seen, however the subclavian artery itself is partly hidden from view as it crosses the first rib behind the insertion of scalenus anterior muscle. Most of the deep veins have been removed to expose branches of the three parts of the axillary artery, including the thoracoacromial artery and its branches, the lateral thoracic artery, thoracodorsal artery and the anterior and posterior circumflex humeral arteries. While the deep veins have been removed the cephalic vein can be seen ascending superficially in the deltopectoral groove into the dectopectoral triangle where it passes through the clavipectoral fascia.

Muscles: The digitations of the serratus anterior muscle are clearly visible on the lateral chest wall. As mentioned above, the pectoralis major muscle is reflected to reveal the pectoralis minor which together form the anterior wall of the axilla. Posteriorly the large fan shaped latissimus dorsi is the most obvious muscle along with the teres major. When viewed posteriorly a few vertical fibers of trapezius can be seen, as can some descending fibers of the lower part of rhomboid major attaching to the medial border of the scapula. Below this the triangle of auscultation is clearly visible. The infraspinatus and teres minor muscles are also visible arising from the infraspinous fossa and lateral border of the scapula respectively. The triceps brachii muscle can be seen in the extensor compartment of the arm.

In the root of the neck the insertion of sternocleidomastoid is visible medially and the trapezius is visible posteriorly. In the floor of the posterior triangle the scalene muscles are visible as is the omohyoid as it lies obliquely in the triangle.

If you are unhappy with your purchase for any reason you can return it to us in an unused condition within 14 days for a refund. A return authorisation number is required for all returns, please contact us for this information if you would like to make a return.

We accept Purchase Orders from Schools, Hospitals, and GPs